A downloadable game for Windows

This is a game about WWI, and about the people who took part in it. Meet the characters manning the trenches, and discover their personalities, their thoughts, fears and desires, behind their horizon blue uniforms.

It would require a great historian, to explain the causes of the Great War. Let it suffice to say, that Germany and Austria were allied, and at war with Russia, Great Britain, and France. All across Europe, millions of men were called to serve, and millions more volunteered out of love of country, and sense of duty.

Within one month since the outbreak of war, german armies were marching through Belgium, and then onto french territory, approaching Paris. A quick victory was at Germany's hand, but such prospect was soon thwarted at the Marne, where the french and british forces made a desperate stand.

Defeated, and driven off, the germans switched to the defence, retreating to an advantageous position, and digging in. A tactical stalemate ensued, and the war settled into a war of attrition.

Before long, the entire frontline turned into a labyrinthian system of trenches, dugouts, and barbed wire fences. Global empires, used to the carving up of entire continents, were now fighting for the control of the most tiny strips of land. And every day, the war was taking its toll, claiming lives in the thousands.

Now it's early spring, nineteen sixteen. In almost two years of war, despite frequent attempts to break the stalemate, the shape of the frontline has changed very little. What has changed much is the landscape, ravaged by constant shelling, and poisoned by the use of terrible new weapons.

The sixtyfirst regiment of infantry, veteran of last year's battle of Artois, is currently manning the trenches a few miles west of Saint Magloire, in the region of Champagne. This sector of the front has kept quiet for a while. But more recently, movements of troops at the rear have caught the attention of the germans.

A pomeranian division has deployed in the opposite trenches, and artillery fire has become more frequent, and intense. The telephone lines are down, knocked out by the lucky hit of a german howitzer, and until the problem is solved, communications between the regiment and headquarters have to be done via couriers.

You play the part of one such courier. Your task is to deliver a dispatch to colonel Coreau, who's at the command of the regiment. It's eight in the morning, on april the sixth, nineteen sixteen, and the colonel is waiting for you in the trenches.

Headphones, a dark room, and about an hour of spare time are recommended. The game lacks a saving system. After the game ends, more content becomes accessible by clicking the extras button in the main menu.

The game has been notably improved by updates. All releases are standalone, and the current version is 1.5. If the game doesn't work on your machine, or if you find a typo or a bug, please leave a comment or contact the developer.

If you enjoyed playing Adrian, please consider making a donation. You may also leave a rating or review, and it would be greatly appreciated.

Nice little game. As a french person, I really enjoyed listening to each soldier's story. They each have their own dialogue and it's very interesting to hear. I still haven't finished the game, but so far I don't regret installing the game.

This is helpful, thanks. And thanks for playing.

Really interesting little game. I still couldn't finish it, but it often comes into my mind - mostly because I can hardly wait to see how the updated version will turn out. I wonder which aspects you're planning to change or improve. Keep it up! :)

Really great, different war game! The visual style with the slight fog and the good story go together really well. It's a bit like reading an interactive book.

We'd be happy to see this game in our this year's Game Development World Championship!

In my usual game search, I came across the symbolic barbed wire Adrian. This was an amazingly intense narrative despite the brief silences between artillery shelling. That silence amplified the immersion and made me dwell on the Grimm, Dark power of war this expresses. I have to say I was surprised by what this game entailed for me, looking at the character models, I was expecting perhaps a small combat sequence (contrary to the description), but the result was a rather wonderfully dark experience as an observer. This is a wonderful experience despite the downside of it all resulting in such great losses. I hope to revisit this again just to gain new perspective on all the stories. Happy Memorial Day to all! 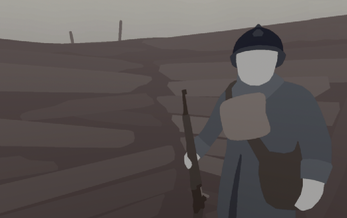 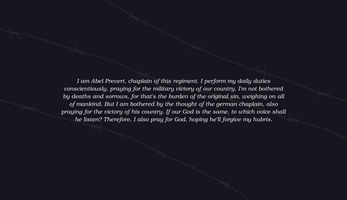 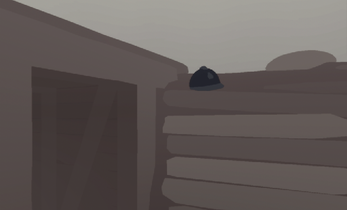 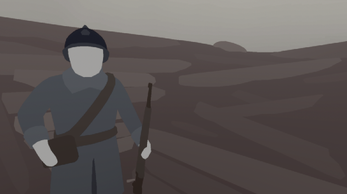 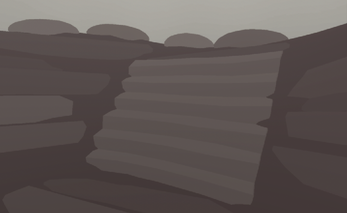 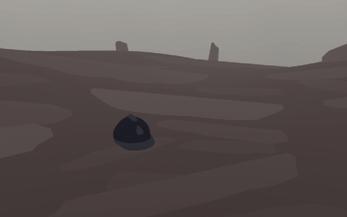